This tutorial is the ninth in a series of 12 that teach you how to build MVC 5 applications using Entity Framework for data access and Visual Basic. In earlier tutorials you learned how to read and update data using the synchronous programming model. In this tutorial you see how to implement the asynchronous programming model. Asynchronous code can help an application perform better because it makes better use of server resources.

In this tutorial you'll also see how to use stored procedures for insert, update, and delete operations on an entity. Finally, you'll redeploy the application to Windows Azure, along with all of the database changes that you've implemented since the first time you deployed.

Why bother with asynchronous code?

A web server has a limited number of threads available, and in high load situations all of the available threads might be in use. When that happens, the server can’t process new requests until the threads are freed up. With synchronous code, many threads may be tied up while they aren’t actually doing any work because they’re waiting for I/O to complete. With asynchronous code, when a process is waiting for I/O to complete, its thread is freed up for the server to use for processing other requests. As a result, asynchronous code enables server resources to be use more efficiently, and the server is enabled to handle more traffic without delays.

Create a Department controller the same way you did the earlier controllers, except this time select the Use async controller actions check box. 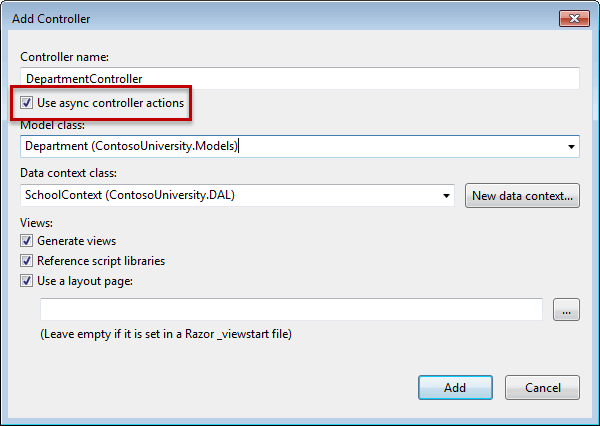 The following highlights show how what was added to the synchronous code for the Index method to make it asynchronous:

In the Details method and the HttpGet Edit and Delete methods, the Find method is the one that causes a query to be sent to the database, so that's the method that gets executed asynchronously:

In the Create , HttpPost Edit, and DeleteConfirmed methods, it is the SaveChanges method call that causes a command to be executed, not statements such as db.Departments.Add(department) which only cause entities in memory to be modified.

Open Views\Department\Index.vbhtml, and replace the template code with the following code:

This code changes the title from Index to Departments, moves the Administrator name to the right, and provides the full name of the administrator.

In the Create, Delete, Details, and Edit views, change the caption for the InstructorID field to "Administrator" the same way you changed the department name field to "Department" in the Course views. 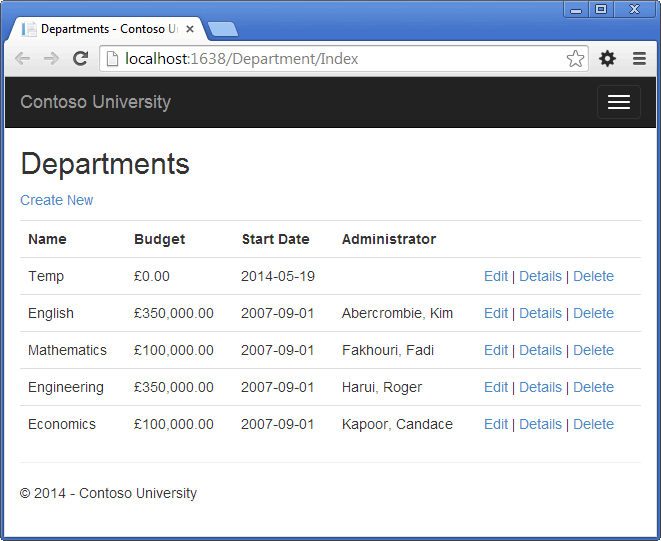 Everything works the same as in the other controllers, but in this controller all of the SQL queries are executing asynchronously.

Some things to be aware of when you are using asynchronous programming with the Entity Framework:

Use stored procedures for inserting, updating, and deleting

If you want to customize what generated stored procedures do, you can edit the scaffolded code for the migrations Up method that creates the stored procedure. That way your changes are reflected whenever that migration is run and will be applied to your production database when migrations runs automatically in production after deployment.

If you want to change an existing stored procedure that was created in a previous migration, you can use the Add-Migration command to generate a blank migration, and then manually write code that calls the AlterStoredProcedure method.

This section requires you to have completed the optional Deploying the app to Windows Azure section in theMigrations and Deployment tutorial of this series. If you had migrations errors that you resolved by deleting the database in your local project, skip this section.

In this tutorial you saw how to improve server efficiency by writing code that executes asynchronously, and how to use stored procedures for insert, update, and delete operations. In the next tutorial, you'll see how to prevent data loss when multiple users try to edit the same record at the same time.