This tutorial is the tenth in a series of 12 that teach you how to build MVC 5 applications using Entity Framework for data access and Visual Basic. In earlier tutorials you learned how to update data. This tutorial shows how to handle conflicts when multiple users update the same entity at the same time. You'll change the web pages that work with the Department entity so that they handle concurrency errors.

A concurrency conflict occurs when one user displays an entity's data in order to edit it, and then another user updates the same entity's data before the first user's change is written to the database. If you don't enable the detection of such conflicts, whoever updates the database last overwrites the other user's changes. In many applications, this risk is acceptable: if there are few users, or few updates, or if isn't really critical if some changes are overwritten, the cost of programming for concurrency might outweigh the benefit. In that case, you don't have to configure the application to handle concurrency conflicts.

Managing locks has disadvantages. It can be complex to program. It requires significant database management resources, and it can cause performance problems as the number of users of an application increases. For these reasons, not all database management systems support pessimistic concurrency. The Entity Framework provides no built-in support for it, and this tutorial doesn't show you how to implement it. 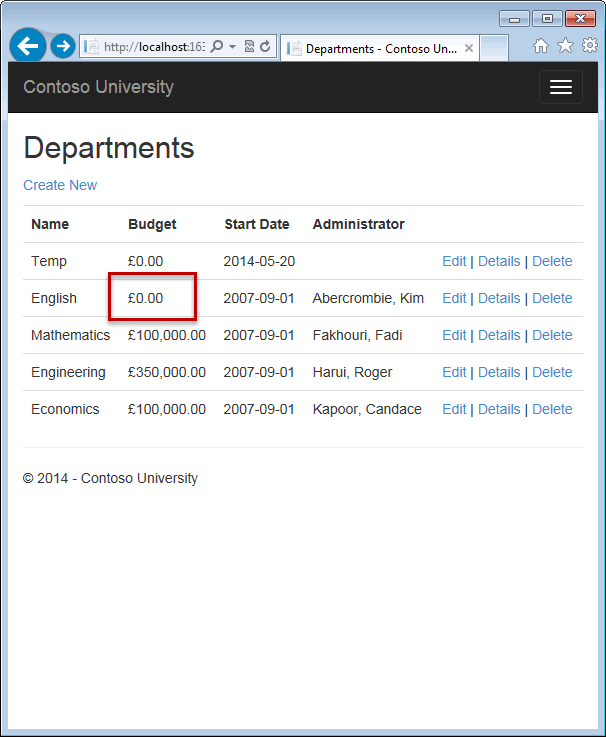 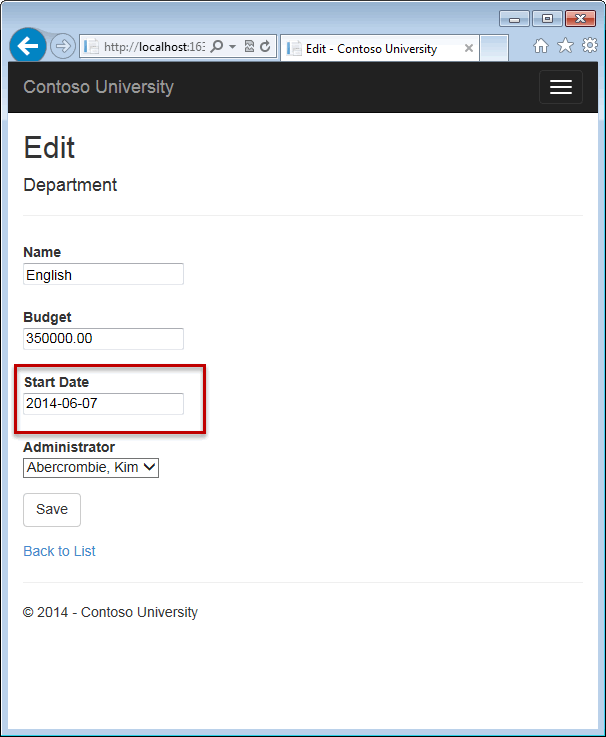 John clicks Save first and sees his change when the browser returns to the Index page, then Jane clicks Save. What happens next is determined by how you handle concurrency conflicts. Some of the options include the following:

You can resolve conflicts by handling OptimisticConcurrencyException exceptions that the Entity Framework throws. In order to know when to throw these exceptions, the Entity Framework must be able to detect conflicts. Therefore, you must configure the database and the data model appropriately. Some options for enabling conflict detection include the following:

In the remainder of this tutorial you'll add a rowversion tracking property to the Department entity, create a controller and views, and test to verify that everything works correctly.

Add an Optimistic Concurrency  Property to the Department Entity

The Timestamp attribute specifies that this column will be included in the Where clause of Update and Delete commands sent to the database. The attribute is called Timestamp because previous versions of SQL Server used a SQL timestamp data type before the SQL rowversion replaced it. The .Net type for rowversion is a byte array.

If you prefer to use the fluent API, you can use the IsConcurrencyToken method to specify the tracking property, as shown in the following example:

By adding a property you changed the database model, so you need to do another migration. In the Package Manager Console (PMC), enter the following commands:

In Controllers\DepartmentController.vb, add an Imports statement:

In the DepartmentController.vb file, change all four occurrences of "LastName" to "FullName" so that the department administrator drop-down lists will contain the full name of the instructor rather than just the last name.

Replace the existing code for the HttpPost Edit method with the following code:

If no rows are affected by the UPDATE command (no rows have the original RowVersion value),  the Entity Framework throws a DbUpdateConcurrencyException exception, and the code in the catch block gets the affected Department entity from the exception object.

This object has the new values entered by the user in its Entity property, and you can get the values read from the database by calling the GetDatabaseValues method.

The GetDatabaseValues method returns Nothing if someone has deleted the row from the database; otherwise, you have to cast the object returned to the Department class in order to access the Department properties.

A longer error message explains what happened and what to do about it:

In Views\Department\Edit.vbhtml, add a hidden field to save the RowVersion property value, immediately following the hidden field for the DepartmentID property: 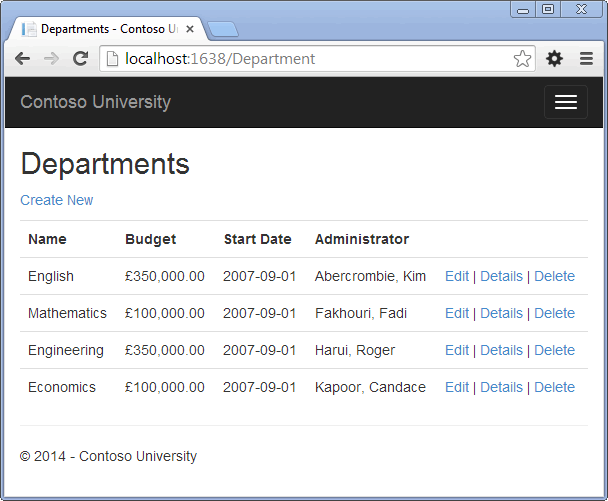 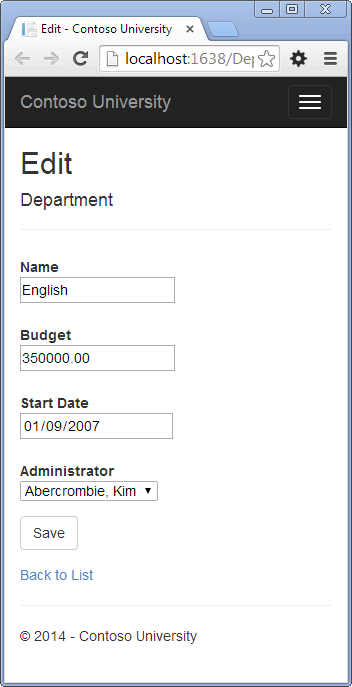 Change a field in the first browser tab and click Save. 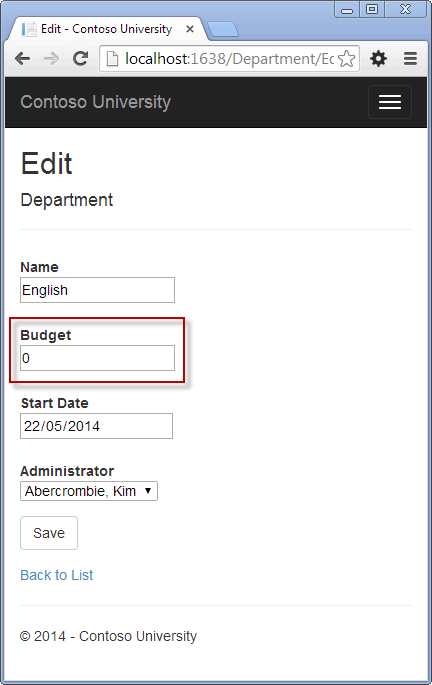 The browser shows the Index page with the changed value. 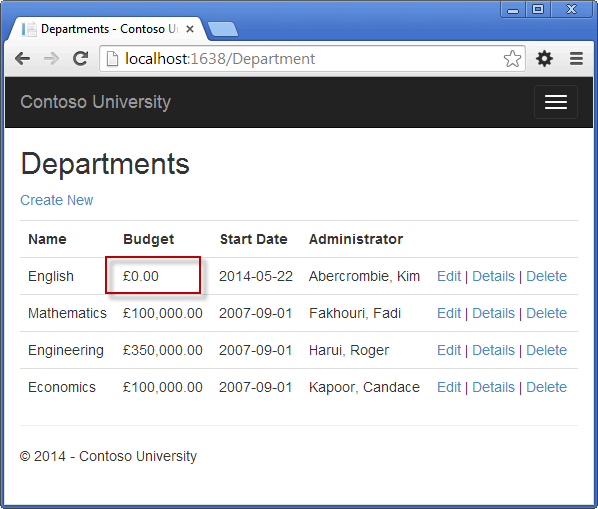 Change a field  in the second browser tab and click Save.

Click Save in the second browser tab. You see an error message: 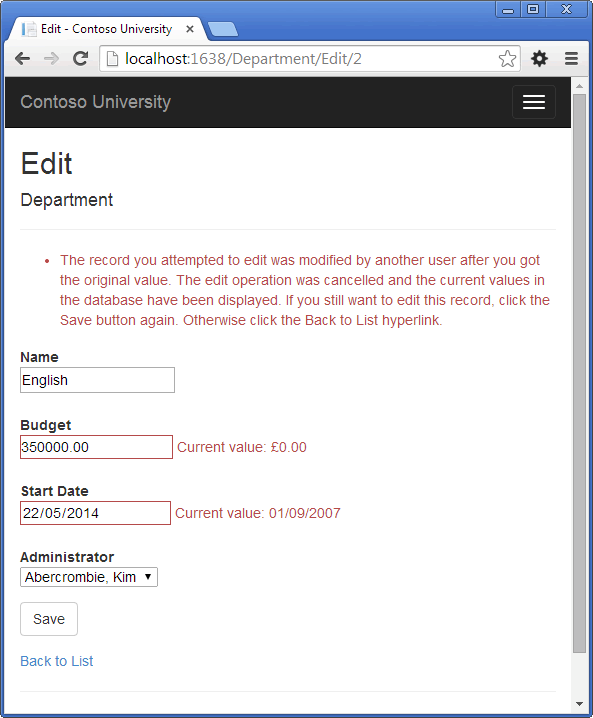 Click Save again. The value you entered in the second browser tab is saved along with the original value of the data you changed in the first browser. You see the saved values when the Index page appears. 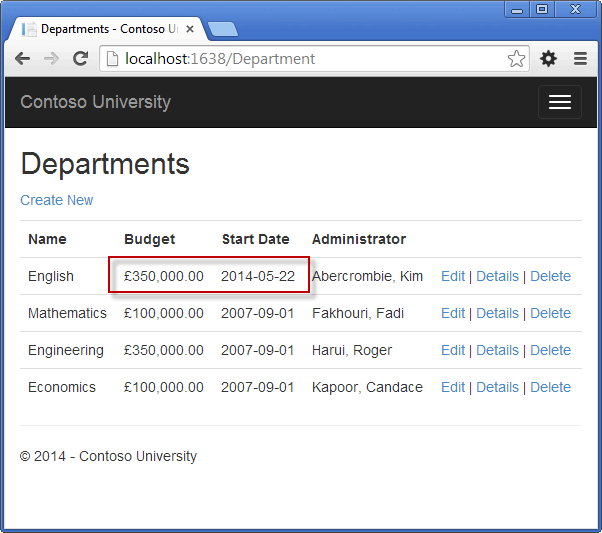 For the Delete page, the Entity Framework detects concurrency conflicts caused by someone else editing the department in a similar manner. When the HttpGet Delete method displays the confirmation view, the view includes the original RowVersion value in a hidden field. That value is then available to the HttpPost Delete method that's called when the user confirms the deletion. When the Entity Framework creates the SQL DELETE command, it includes a WHERE clause with the original RowVersion value. If the command results in zero rows affected (meaning the row was changed after the Delete confirmation page was displayed), a concurrency exception is thrown, and the HttpGet Delete method is called with an error flag set to true in order to redisplay the confirmation page with an error message. It's also possible that zero rows were affected because the row was deleted by another user, so in that case a different error message is displayed.

In DepartmentController.vb, replace the HttpGet Delete method with the following code:

The method accepts an optional parameter that indicates whether the page is being redisplayed after a concurrency error. If this flag is true, an error message is sent to the view using a ViewBag property.

Replace the code in the HttpPost Delete method (named DeleteConfirmed) with the following code:

In the scaffolded code that you just replaced, this method accepted only a record ID:

You've changed this parameter to a Department entity instance created by the model binder. This gives you access to the RowVersion property value in addition to the record key.

In Views\Department\Delete.vbhtml, replace the scaffolded code with the following code that adds an error message field and hidden fields for the DepartmentID and RowVersion properties. The changes are highlighted.

This code adds an error message between the h2 and h3 headings:

It replaces LastName with FullName in the Administrator field:

Finally, it adds hidden fields for the DepartmentID and RowVersion properties after the Html.BeginForm statement:

In the first window, change one of the values, and click Save :

The Index page confirms the change. 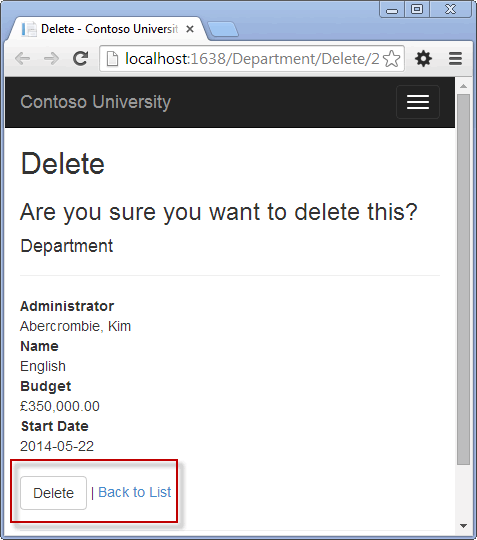 You see the concurrency error message, and the Department values are refreshed with what's currently in the database. 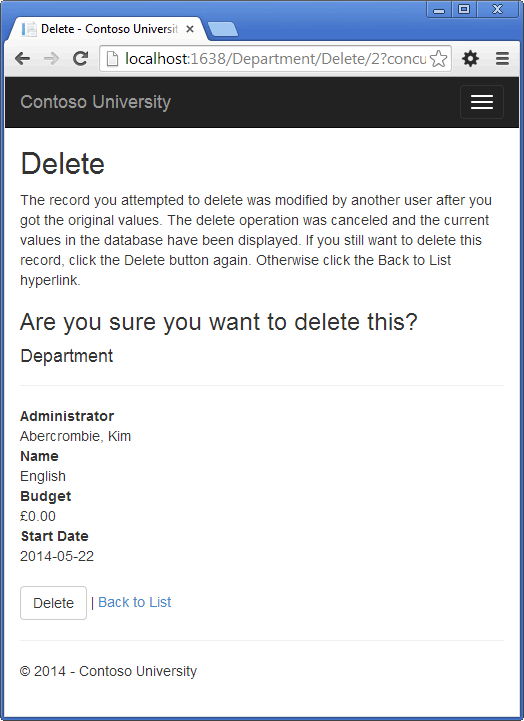 If you click Delete again, you're redirected to the Index page, which shows that the department has been deleted.

This completes the introduction to handling concurrency conflicts. For information about other ways to handle various concurrency scenarios, see Optimistic Concurrency Patterns and Working with Property Values on MSDN. The next tutorial shows how to implement table-per-hierarchy inheritance for the Instructor and Student entities.