This tutorial is the fifth in a series of 12 that teach you how to build MVC 5 applications using Entity Framework for data access and Visual Basic. This tutorial covers how to enable Code First Migrations and then deploy your database to Windows Azure. The Migrations feature enables you to change the data model and deploy your changes to production by updating the database schema without having to drop and re-create the database. The section covering deployment to Azure is optional; you can continue with the remaining tutorials without having deployed the project.

When you develop a new application, your data model changes frequently, and each time the model changes, it gets out of sync with the database. You have configured the Entity Framework to automatically drop and re-create the database each time you change the data model. When you add, remove, or change entity classes or change your DbContext class, the next time you run the application it automatically deletes your existing database, creates a new one that matches the model, and seeds it with test data.

This method of keeping the database in sync with the data model works well until you deploy the application to production. When the application is running in production it is usually storing data that you want to keep, and you don't want to lose everything each time you make a change such as adding a new column. The Code First Migrations feature solves this problem by enabling Code First to update the database schema instead of dropping and re-creating the database. In this tutorial, you'll deploy the application, and to prepare for that you'll enable Migrations.

Set up the Seed Method

For this tutorial, you'll be using Migrations for deployment, but your Seed method will insert test data anyway in order to make it easier to see how application functionality works without having to manually insert a lot of data.

When you executed the add-migration command, Migrations generated the code that would create the database from scratch. This code is also in the Migrations folder, in the file named <timestamp>_InitialCreate.vb. The Up method of the InitialCreate class creates the database tables that correspond to the data model entity sets, and the Down method deletes them.

This is the initial migration that was created when you entered the add-migration InitialCreate command. The parameter (InitialCreate in the example) is used for the file name and can be whatever you want; you typically choose a word or phrase that summarizes what is being done in the migration. For example, you might name a later migration "AddDepartmentTable".

If you created the initial migration when the database already exists, the database creation code is generated but it doesn't have to run because the database already matches the data model. When you deploy the app to another environment where the database doesn't exist yet, this code will run to create your database, so it's a good idea to test it first. That's why you changed the name of the database in the connection string earlier - so that migrations can create a new one from scratch.

So far the application has been running locally in IIS Express on your development computer.  To make it available for other people to use over the Internet, you have to deploy it to a web hosting provider. In this section of the tutorial you'll deploy it to a Windows Azure Web Site.  This section is optional; you can skip this and continue with the following tutorial, or you can adapt the instructions in this section for a different hosting provider of your choice.

Note: I don't have an Azure account and have not followed the steps described in the next section. I have included this verbatim from the original tutorial for completeness. If you have any questions about the process of signing up for an Azure account or deployment to Azure, you should seek further assistance at the MSDN Azure forum or Stackoverflow, where you should tag your question with "Azure".

To deploy the database you'll use Code First Migrations.  When you create the publish profile that you use to configure settings for deploying from Visual Studio, you'll select a check box labeled Execute Code First Migrations (runs on application start).  This setting causes the deployment process to automatically configure the application Web.config file on the destination server so that Code First uses the MigrateDatabaseToLatestVersion initializer class.

Create a web site and a SQL database in Windows Azure

Your Windows Azure Web Site will run in a shared hosting environment, which means it runs on virtual machines (VMs) that are shared with other Windows Azure clients. A shared hosting environment is a low-cost way to get started in the cloud. Later, if your web traffic increases, the application can scale to meet the need by running on dedicated VMs.

Deploy the application to Windows Azure 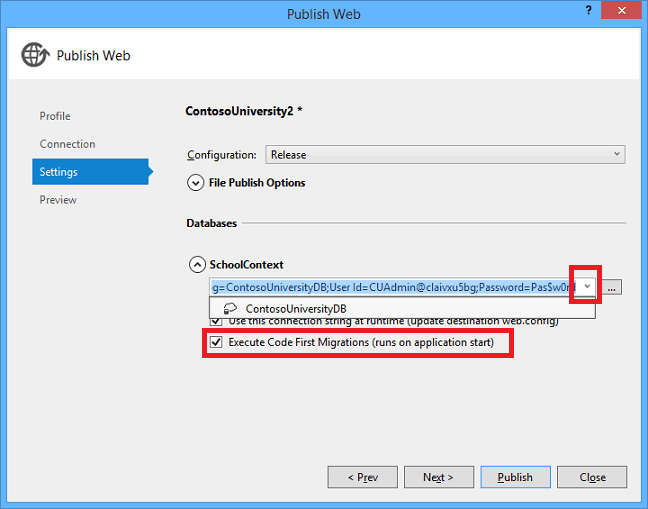 This setting causes the deployment process to automatically configure the application Web.config file on the destination server so that Code First uses the MigrateDatabaseToLatestVersion initializer class.

At this point your SchoolContext database has been created in the Windows Azure SQL Database because you selected Execute Code First Migrations (runs on app start). The Web.config file in the deployed web site has been changed so that the MigrateDatabaseToLatestVersion initializer runs the first time your code reads or writes data in the database (which happened when you selected the Students tab): The deployment process also created a new connection string (SchoolContext_DatabasePublish) for Code First Migrations to use for updating the database schema and seeding the database.

You can find the deployed version of the Web.config file on your own computer inContosoUniversity\obj\Release\Package\PackageTmp\Web.config. You can access the deployed Web.config file itself by using FTP. For instructions, see ASP.NET Web Deployment using Visual Studio: Deploying a Code Update. Follow the instructions that start with "To use an FTP tool, you need three things: the FTP URL, the user name, and the password."

Note: The web app doesn't implement security, so anyone who finds the URL can change the data. For instructions on how to secure the web site, see Deploy a Secure ASP.NET MVC app with Membership, OAuth, and SQL Database to a Windows Azure Web Site. You can prevent other people from using the site by using the Windows Azure Management Portal or Server Explorer in Visual Studio to stop the site. 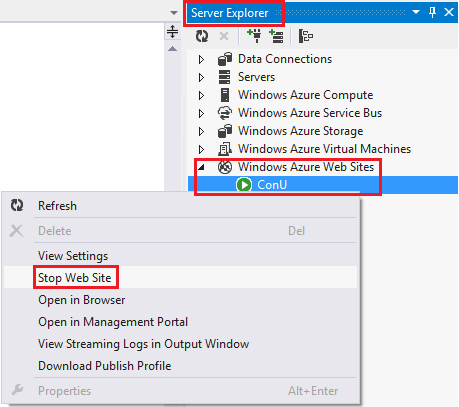 If you deploy a database by running migrations automatically as shown in this tutorial, and you are deploying to a web site that runs on multiple servers, you could get mutiple servers trying to run migrations at the same time.  Migrations are atomic, so if two servers try to run the same migration, one will succeed and the other will fail (assuming the operations can't be done twice). In that scenario if you want to avoid those issues, you can call migrations manually and set up your own code so that it only happens once. For more information, see Running and Scripting Migrations from Code on Rowan Miller's blog and Migrate.exe (for executing migrations from the command line) on MSDN.

For information about other migrations scenarios, see Migrations Screencast Series.

In this tutorial you've seen how to enable migrations and deploy the application. In the next tutorial you'll begin looking at more advanced topics by expanding the data model.