This tutorial is the first in a series of a Visual Basic versions of the Getting Started with EF 6 using MVC 5 tutorials published on the www.asp.net site. The original series, produced by Tom Dykstra and Rick Anderson ( @RickAndMSFT ) was written using the C# language. My versions keep as close to the originals as possible, changing only the coding language. The narrative text is largely unchanged from the original and is used with permission from Microsoft.

The tutorial series teaches you how to create ASP.NET MVC 5 applications using the Entity Framework 6 and Visual Studio 2013 Express for Web. This tutorial uses the Code First workflow. For information about how to choose between Code First, Database First, and Model First, see Entity Framework Development Workflows.

The application you'll be building in these tutorials is a simple university web site.

Users can view and update student, course, and instructor information. Here are a few of the screens you'll create. 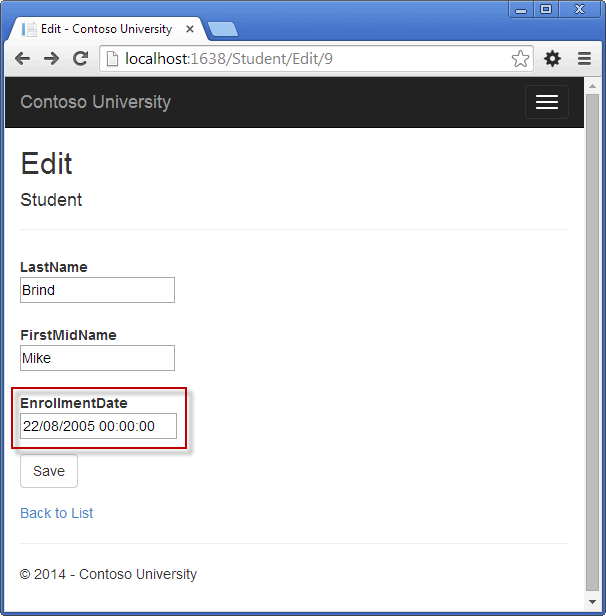 The UI style of this site has been kept close to what's generated by the built-in templates, so that the tutorial can focus mainly on how to use the Entity Framework. 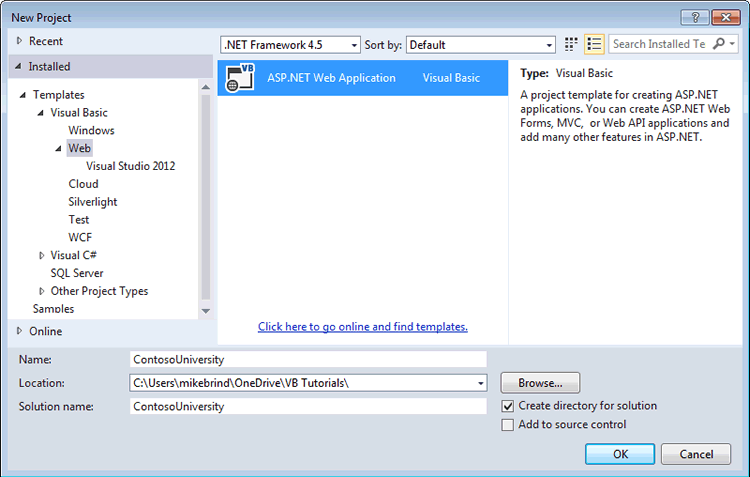 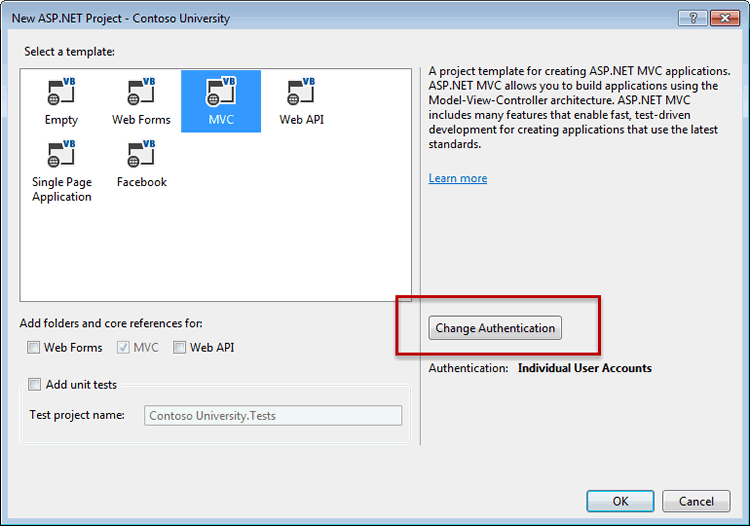 Back in the New ASP.NET Project dialog box, click OK to create the project.

Set Up the Site Style

A few simple changes will set up the site menu, layout, and home page.

The changes are highlighted.

In Views\Home\Index.vbhtml, replace the contents of the file with the following code to replace the text about ASP.NET and MVC with text about this application:

Press CTRL+F5 to run the site. You see the home page with the main menu.

In the Package Manager Console window enter the following command:

The image shows 6.1.0 being installed, but NuGet will install the latest version of Entity Framework (excluding pre-release versions.

The next step is one of a few steps that this tutorial has you do manually, but which could have been done automatically by the ASP.NET MVC scaffolding feature. You're doing them manually so that you can see the steps required to use the Entity Framework. You'll use scaffolding later to create the MVC controller and views. An alternative is to let scaffolding automatically install the EF NuGet package, create the database context class, and create the connection string. When you're ready to do it that way, all you have to do is skip those steps and scaffold your MVC controller after you create your entity classes.

In the following sections you'll create a class for each one of these entities.

Note If you try to compile the project before you finish creating all of these entity classes, you'll get compiler errors.

In the Models folder, create a class file named Student.vb and replace the template code with the following code:

The ID property will become the primary key column of the database table that corresponds to this class. By default, the Entity Framework interprets a property that's named ID or classnameID as the primary key.

Navigation properties are typically defined as virtual so that they can take advantage of certain Entity Framework functionality such as lazy loading. (Lazy loading will be explained later, in the Reading Related Data tutorial later in this series.)

If a navigation property can hold multiple entities (as in many-to-many or one-to-many relationships), its type must be a list in which entries can be added, deleted, and updated, such as ICollection.

In the Models folder, create Enrollment.vb and replace the existing code with the following code:

The EnrollmentID property will be the primary key; this entity uses the classnameID pattern instead of ID by itself as you saw in the Student entity. Ordinarily you would choose one pattern and use it throughout your data model. Here, the variation illustrates that you can use either pattern. In a later tutorial, you'll see how using ID without classname makes it easier to implement inheritance in the data model.

The CourseID property is a foreign key, and the corresponding navigation property is Course. An Enrollment entity is associated with one Course entity.

In the Models folder, create Course.vb, replacing the template code with the following code:

The Enrollments property is a navigation property. A Course entity can be related to any number of Enrollment entities.

We'll say more about the DatabaseGenerated attribute in a later tutorial in this series. Basically, this attribute lets you enter the primary key for the course rather than having the database generate it.

The main class that coordinates Entity Framework functionality for a given data model is the database context class. You create this class by deriving from the System.Data.Entity.DbContext class. In your code you specify which entities are included in the data model. You can also customize certain Entity Framework behavior. In this project, the class is named SchoolContext.

To create a folder in the ContosoUniversity project, right-click the project in Solution Explorer and click Add, and then click New Folder. Name the new folder DAL (for Data Access Layer). In that folder create a new class file named SchoolContext.vb, and replace the template code with the following code:

The name of the connection string (which you'll add to the Web.config file later) is passed in to the constructor.

You could also pass in the connection string itself instead of the name of one that is stored in the Web.config file. For more information about options for specifying the database to use, see Entity Framework - Connections and Models.

The modelBuilder.Conventions.Remove statement in the OnModelCreating method prevents table names from being pluralized. If you didn't do this, the generated tables in the database would be named Students, Courses, and Enrollments. Instead, the table names will be Student, Course, and Enrollment. Developers disagree about whether table names should be pluralized or not. The original tutorial uses the singular form so we will stick with that- although my personal preference is the plural form, but the important point is that you can select whichever form you prefer by including or omitting this line of code, and once haivng made that selection, you should be consistent.

Set up EF to initialize the database with test data

The Entity Framework can automatically create (or drop and re-create) a database for you when the application runs. You can specify that this should be done every time your application runs or only when the model is out of sync with the existing database. You can also write a Seed method that the Entity Framework automatically calls after creating the database in order to populate it with test data.

In the DAL folder, create a new class file named SchoolInitializer.vb and replace the template code with the following code, which causes a database to be created when needed and loads test data into the new database.

To tell Entity Framework to use your initializer class, add an element to the entityFramework element in the application Web.config file (the one in the root project folder), as shown in the following example:

The context type specifies the fully qualified context class name and the assembly it's in, and the databaseInitializer type specifies the fully qualified name of the initializer class and the assembly it's in. (When you don't want EF to use the initializer, you can set an attribute on the context element: disableDatabaseInitialization="true".) For more information, see Entity Framework - Config File Settings.

As an alternative to setting the initializer in the Web.config file is to do it in code by adding a Database.SetInitializer statement to the Application_Start method in in the Global.asax.vb file. For more information, see Understanding Database Initializers in Entity Framework Code First.

Note: When you deploy an application to a production web server, you must remove or disable code that drops and re-creates the database. You'll do that in a later tutorial in this series.

Set up EF to use a SQL Server Express LocalDB database

LocalDB is a lightweight version of the SQL Server Express Database Engine. It's easy to install and configure, starts on demand, and runs in user mode. LocalDB runs in a special execution mode of SQL Server Express that enables you to work with databases as .mdf files. You can put LocalDB database files in the App_Data folder of a web project if you want to be able to copy the database with the project. The user instance feature in SQL Server Express also enables you to work with .mdf files, but the user instance feature is deprecated; therefore, LocalDB is recommended for working with .mdf files. In Visual Studio 2012 and later versions, LocalDB is installed by default with Visual Studio.

In this tutorial you'll work with LocalDB. Open the application Web.config file and add a connectionStrings element preceding the appSettings element, as shown in the following example. (Make sure you update the Web.config file in the root project folder. There's also a Web.config file is in the Views subfolder that you don't need to update.)

You don't actually have to have a connection string in the Web.config file. If you don't supply a connection string, Entity Framework will use a default one based on your context class. For more information, see Code First to a New Database.

Creating a Student Controller and Views

Now you'll create a web page to display data, and the process of requesting the data will automatically trigger
the creation of the database. You'll begin by creating a new controller. But before you do that, build the project to make the model and context classes available to MVC controller scaffolding. 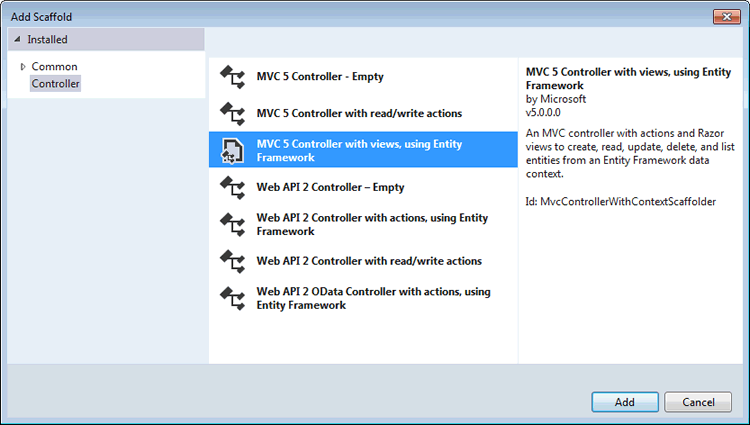 When you ran the Students page and the application tried to access the database, EF saw that there was no database and so it created one, then it ran the seed method to populate the database with data.

The ContosoUniversity1.mdf and .ldf database files are in the C:\Users\<yourusername> folder.

The amount of code you had to write in order for the Entity Framework to be able to create a complete database for you is minimal because of the use of conventions, or assumptions that the Entity Framework makes. Some of them have already been noted or were used without you being aware of them:

You've seen that conventions can be overridden. For example, you specified that table names shouldn't be pluralized, and you'll see later how to explicitly mark a property as a foreign key property. You'll learn more about conventions and how to override them in the Creating a More Complex Data Model tutorial later in this series.  For more information about conventions, see Code First Conventions.