This tutorial is the fourth in a series of a Visual Basic versions of the Introduction to ASP.NET MVC 5 tutorials published on the www.asp.net site. The original series, produced by Scott Guthrie (twitter @scottgu ), Scott Hanselman (twitter: @shanselman ), and Rick Anderson ( @RickAndMSFT ) was written using the C# language. My versions keep as close to the originals as possible, changing only the coding language. The narrative text is largely unchanged from the original and is used with permission from Microsoft.

In this section you'll add some classes for managing movies in a database. These classes will be the "model" part of the ASP.NET MVC app.

You’ll use a .NET Framework data-access technology known as the Entity Framework to define and work with these model classes. The Entity Framework (often referred to as EF) supports a development paradigm called Code First. Code First allows you to create model objects by writing simple classes. (These are also known as POCO classes, from "Plain Old CLR Objects.") You can then have the database created on the fly from your classes, which enables a very clean and rapid development workflow. If you are required to create the database first, you can still follow this tutorial to learn about MVC and EF app development. You can then follow Tom Fizmakens ASP.NET Scaffolding tutorial, which covers the database first approach. 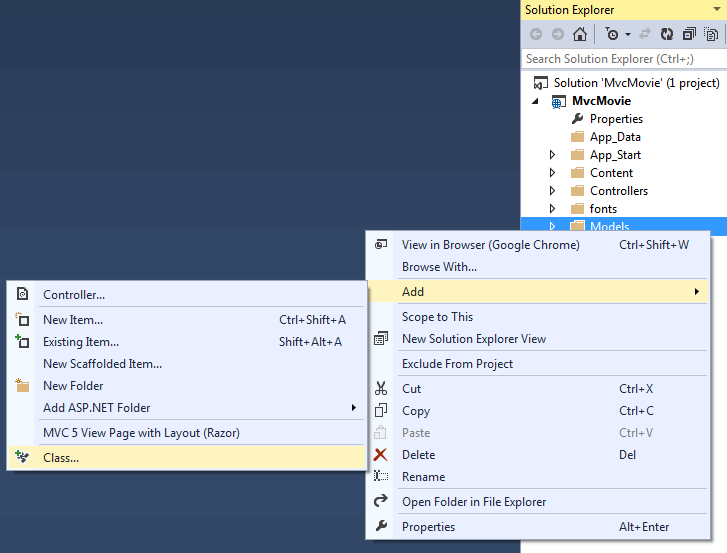 Add the following five properties to the Movie class:

In the same file, add the following MovieDBContext class:

In order to be able to reference DbContext and DbSet, you need to add the following Imports statement at the top of the file:

You can do this by manually typing the Imports statement, or you can click on the blue squiggly line under DbContext, press Shift + Alt + F10 and choose Import 'System.Data.Entity' from the context menu.

We've finally added a model (the M in MVC). In the next section you'll work with the database connection string.