Creating a Connection String and Working with SQL Server LocalDB

This tutorial is the fifth in a series of a Visual Basic versions of the Introduction to ASP.NET MVC 5 tutorials published on the www.asp.net site. The original series, produced by Scott Guthrie (twitter @scottgu ), Scott Hanselman (twitter: @shanselman ), and Rick Anderson ( @RickAndMSFT ) was written using the C# language. My versions keep as close to the originals as possible, changing only the coding language. The narrative text is largely unchanged from the original and is used with permission from Microsoft.

5. Creating a Connection String and Working with SQL Server LocalDB

The MovieDBContext class you created in the previous section handles the task of connecting to the database and mapping Movie objects to database  records. One question you might ask, though, is how to specify which database it will connect to. You don't actually have to specify which database to use,  Entity Framework will default to using  LocalDB. In this section we'll explicitly add a connection string in the Web.config file of the application.

LocalDB is a lightweight version of the SQL Server Express Database Engine that starts on demand and runs in user mode. LocalDB runs in a special execution mode of SQL Server Express that enables you to  work with databases as .mdf files. Typically, LocalDB database files are kept in the App_Data folder of a web project.

SQL Server Express is not recommended for use in production web applications. LocalDB in particular should not be used for production with a web application because it is not designed to work with IIS. However, a LocalDB database can be easily migrated to SQL Server or SQL Azure.

By default, the Entity Framework looks in the web.config file for a connection string named the same as the object context class (MovieDBContext for this project).  For more  information see  SQL Server Connection Strings for ASP.NET Web Applications. 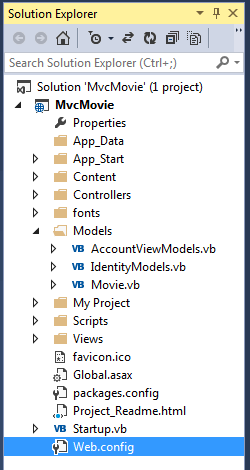 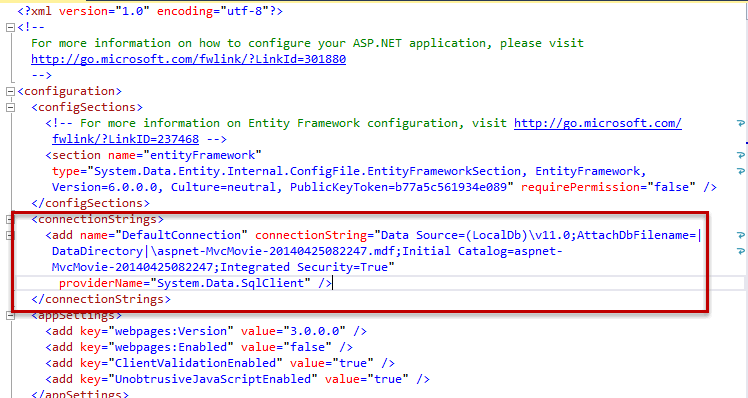 Add the following connection string to the <connectionStrings>  element in the Web.config file.

The following example shows a portion of the Web.config file with  the new connection string added:

You don't actually need to add the MovieDBContext connection string. If you don't specify a connection string, Entity Framework will create a LocalDB database in the users directory with the fully qualified name of the DbContext class (in this case MvcMovie.Models.MovieDBContext). You can name the database anything you like, as long as it has the .mdf  suffix. For example, we could name the database MyFilms.mdf.

Next, you'll build a new MoviesController class that you can use  to display the movie data and allow users to create new movie listings.