This tutorial is the eleventh in a series of 12 that teach you how to build MVC 5 applications using Entity Framework for data access and Visual Basic. In the previous tutorial you handled concurrency exceptions. This tutorial will show you how to implement inheritance in the data model.

In object-oriented programming, you can use inheritance to facilitate code reuse. In this tutorial, you'll change the Instructor and Student classes so that they derive from a Person base class which contains properties such as LastName that are common to both instructors and students. You won't add or change any web pages, but you'll change some of the code and those changes will be automatically reflected in the database.

The Instructor and Student classes in the School data model have several properties that are identical: 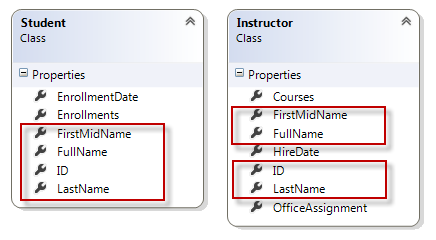 Suppose you want to eliminate the redundant code for the properties that are shared by the Instructor and Student entities. Or you want to write a service that can format names without caring whether the name came from an instructor or a student. You could create a Person base class which contains only those shared properties, then make the Instructor and Student entities inherit from that base class, as shown in the following illustration: 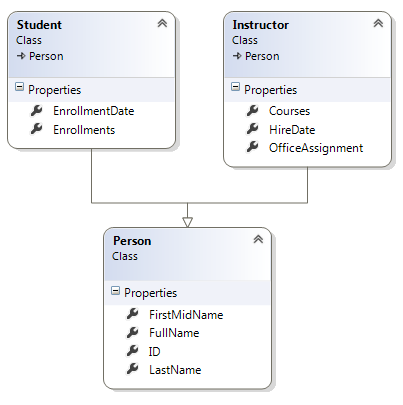 There are several ways this inheritance structure could be represented in the database. You could have a Person table that includes information about both students and instructors in a single table. Some of the columns could apply only to instructors (HireDate), some only to students (EnrollmentDate), some to both (LastName, FirstName). Typically, you'd have a discriminator column to indicate which type each row represents. For example, the discriminator column might have "Instructor" for instructors and "Student" for students.

This pattern of generating an entity inheritance structure from a single database table is called table-per-hierarchy (TPH) inheritance.

An alternative is to make the database look more like the inheritance structure. For example, you could have only the name fields in the Person table and have separate Instructor and Student tables with the date fields.

This pattern of making a database table for each entity class is called table per type (TPT) inheritance.

Yet another option is to map all non-abstract types to individual tables. All properties of a class, including inherited properties, map to columns of the corresponding table. This pattern is called Table-per-Concrete Class (TPC) inheritance. If you implemented TPC inheritance for the Person, Student, and Instructor classes as shown earlier, the Student and Instructor tables would look no different after implementing inheritance than they did before.

This tutorial demonstrates how to implement TPH inheritance. TPH is the default inheritance pattern in the Entity Framework, so all you have to do is create a Person class, change the Instructor and Student classes to derive from Person, add the new class to the DbContext, and create a migration. (For information about how to implement the other inheritance patterns, see Mapping the Table-Per-Type (TPT) Inheritance and Mapping the Table-Per-Concrete Class (TPC) Inheritance in the MSDN Entity Framework documentation.)

In the Models folder, create Person.vb and replace the template code with the following code:

In Instructor.vb, derive the Instructor class from the Person class and remove the key and name fields. The code will look like the following example:

Make similar changes to Student.vb. The Student class will look like the following example:

Add the Person Entity Type to the Model

In SchoolContext.vb, add a DbSet property for the Person entity type:

This is all that the Entity Framework needs in order to configure table-per-hierarchy inheritance. As you'll see, when the database is updated, it will have a Person table in place of the Student and Instructor tables.

Create and Update a Migrations File

In the Package Manager Console (PMC),  enter the following command:

Run the Update-Database command in the PMC. The command will fail at this point because we have existing data that migrations doesn't know how to handle. You get an error message like the following one:

Could not drop object 'dbo.Instructor' because it is referenced by a FOREIGN KEY constraint.

Open Migrations\<timestamp>_Inheritance.vb and replace the Up method with the following code:

This code takes care of the following database update tasks:

(If you had used GUID instead of integer as the primary key type, the student primary key values wouldn't have to change, and several of these steps could have been omitted.)

(In a production system you would make corresponding changes to the Down method in case you ever had to use that to go back to the previous database version. For this tutorial you won't be using the Down method.)

With a new database, there is no data to migrate, and the update-database command is much more likely to complete without errors. For instructions on how to delete the database, see How to Drop a Database from Visual Studio 2012. If you take this approach in order to continue with the tutorial, skip the deployment step at the end of this tutorial or deploy to a new site and database. If you deploy an update to the same site you've been deploying to already, EF will get the same error there when it runs migrations automatically. If you want to troubleshoot a migrations error, the best resource is one of the Entity Framework forums or StackOverflow.com.

Run the site and try various pages. Everything works the same as it did before. 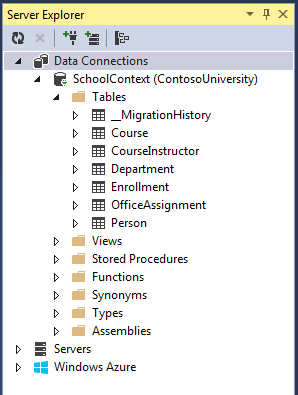 Right-click the Person table, and then click Show Table Data to see the discriminator column.

The following diagram illustrates the structure of the new School database:

This section requires you to have completed the optional Deploying the app to Windows Azure section in Part 3, Sorting, Filtering, and Paging of this tutorial series. If you had migrations errors that you resolved by deleting the database in your local project, skip this step; or create a new site and database, and deploy to the new environment.